Today, while on my holiday, I visited the sight of the Wairau Massacre.  This event has impacted the Maori side of my family as well as the European side.  After the research done, it appears that the massacre is a complex event and it is well worth further research.  At this stage I have information with varying accounts from different perspectives and it is hard to try and remove bias from one side or the other.  I think this is an event has gapes in information and it has been fantasized as to what happened in parts.

The first stop was at the Tuamarina Cemetery where the monument stands as a memorial to the European survey party who died.  The monument has the names of all 22 Europeans who died as part of the massacre, this includes Edward Wakefield from the New Zealand Company.  Four had died as part of the initial confrontation, the remaining 18 who had surrendered were killed as Utu for the death of Te Rangihaeata’s wife Te Rongo.  There are no names of the natives who died in this conflict.

The next stop was just across the highway at the site of the incident at the Tuamarina Stream.

Just off the highway is a rest stop which has the below monument to 2 of the surviving surveyors who were able to continue surveying after the incident when the crown had acquired the land.

The below board stands at the sight of the conflict just above the Tuamarina stream.  The board states the European account of the incident.

The last trip was back into Blenheim to see Blenkinsop’s Cannon.  This was the catalyst for the incident at Tuamarina due to miscommunication from Blenkinsop to a Maori party lead by Te Rauparaha regarding the sale of a cannon in 1832.  The Maori understood this to be for Blenkinsopp to access water and timber and be able to camp, however the document written up stated it was for the sale of the entire Wairau Valley.

From the information uncovered at the above site, it is clear that more research is required.  It is not entirely clear what Te Rauparaha did in his defence after the sale with regards to confronting Blenkinsopp or other Europeans after discovering the full extent of the sale.  There was 11 years between the sale which had 6 Maori signing the initial sale document, and the incident at Tuamarina.

It is believed, from most sources, that Blenkinsopp was deceitful in his actions during the sale. The cannon was acquired without permission for the sale, and Blenkinsopp spiked it so that it could not be used. Te Rangihaeata had seen the cannon previously and was impressed by its power when it was fired.

Quick internet searches do not appear to yield much either, I cannot find any writings on his character otherwise and outside the sale, or any information for Te Rauparaha’s actions apart from returning the cannon to it’s original owner and destroying his copy off the sale deed.

The Wairau Massacre is not the end of the story, it continues through to the courts siding with the Maori for what happened at the Massacre, and the eventual sale of the Wairau while Te Rauparaha was imprisoned.  This has fed racial tensions amongst the crown and Maori from the area for many years only having recently been able to settle some issues through the Maori Land Disputes. 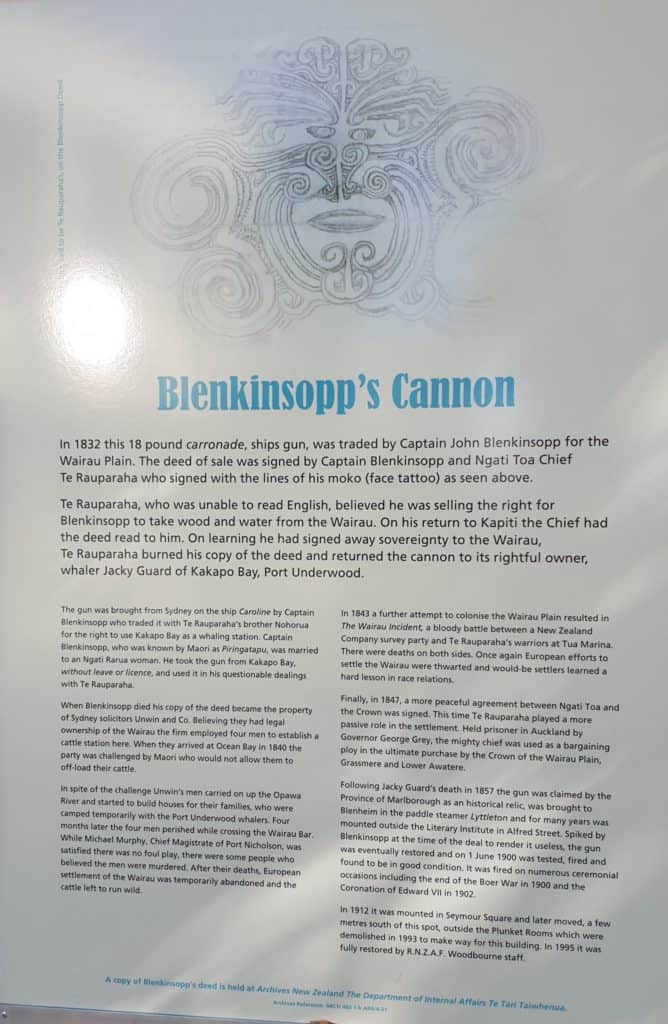