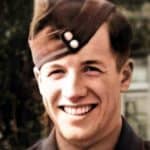 Rodney Alexander Cameron(1935-2015) was a farmer and silag worker who lived in the Manawatu area later moving to Auckland.  He was dedicated to Clan Cameron where he was Treasurer and Secretary for many years.  Rodney and his wife, Alison, were also the newsletter editors up until 1992 when Rodney was made a life member. Rodney has been and active genealogist contributing the Kaiwarra Camerons with information about his direct descendants who migrated to New Zealand in 1840.  Rodney was also an enthusiastic Christian and devoted a large amount of time to the Hope Christian Center in Papatoetoe.

Rodney was the oldest of 4 siblings;

Alison and Rodney had 3 Children;

The early life of Rodney Cameron

Rodney was born in Masterton, his father, Ronald, farmed on one half of the 450 acre “Matapihi” block on Blackrock Road.  The family them moved to Rangitumau in 1939 to a 320 acre block owned by Rodney’s Grandfather, Walter.

Rodney started school in 1940 attending only half a day for a start, he would get a ride home in the afternoons in the “Times Age” delivery car.

In 1942 during the big earthquake their house was condemned so for a little while Rodney’s family lived with Eric and Tood Wilton, then they stayed with Dorothy Connell in the school house at which time Rodneys’ Father Ronald went into the airforce.  They also stayed with Jessie Groves on Railway Road in which time they found out that Kev(?) had been shot down in France. The family moved into their new house in 1943 which was situated on a different part of the farm.

In 1945, at the age of 10, Rodney went off to Scots College starting in Std 3 and stayed until the end of 1949.  Rodney would travel down at the beginning of each term, and travel back home at the end.  During his last year he started learning the bagpipes under Mr(?) McPhee, however he never played in the Scots band.

In November of 1950, Rodney joined Wright Stephenson & Co. for about 18 months as Office boy. During his time with Wright Stephensons there was a wool boom caused by the Korean war making the price of wool go through the roof.  The price went from around 2/6d a pound to 10 to 12 shillings a pound.  Rodney recalled receiving a bonus of 25 pounds which was the equivalent of about 5 weeks wages.

After leaving Wright Stephensons, Rodney did casual farm work, including working for John Cave at Gladstone, fleecoing, and fencing etc.  In 1953 Rodney worked for Jim Lachore for 6 months, returning a couple of times after that.

In 1954 from June to September Rodney completed his Compulsory Military Training in the Air Force at Whenuapai, Auckland.

In 1955 Rodney travelled to Sydney and stayed with a step brother of his grandmother (Madeline Cameron nee Baldwin), Syd(Raymond Sydney Baldwin) and June Elsie Baldwin (nee Schwilk). During this time Rodney traveled to Brisbane and Towoomba.  Rodney was away for about 3 months and returned to work on “Matapihi” for Donald Thompson, originally farmed on by Rodney’s father Ronald.

At this time his father was thinking of selling his farm and shifting elsewhere, so Rodney intended to get a job in Northland, however the tractor driving job he applied for was actually in Moerangi between Tokaanu and Taumaranui.  While returning from Auckland, Rondey called into visit Jack Hancock in Tokoroa who offered him a tractor driving job at Kinleith.

The Family life of Rodney Cameron

While working at Matapihi, Rodney got engaged to Alison Binns, but it wasn’t until about 3 months after they he was working in Tokoroa, that they got married.  They were married 26th July 1958, and share the same wedding anniversary as Rodney’s Grandparents.  Alison and Rodney stayed in Tokoroa for about 2 and a half years before moving back to Rangitumau where Rodney worked for Trevor Wilton.

During this time his father Ronald sold his farm and bought another one on Farm Road in Waipukurau.  Rodney and his father farmed in partnership fo the next 5 years.  After 5 years, Ronald wanted to retire and as a result of that and other reasons, the farm was sold, after which Rondey worked for 15 months in Maxwell, just outside Wanganui.

Rodney and his family then settled in Ohingaiti where they stayed for nearly 30 years.  They first leased a 62 acre block across the river in May 1967.

The family moved to Ohingaiti Village in 1972 as their daughter Marianne started High School.  They first shifted into Shirley McNight’s cottage, then Alison and Rodney re-opened the Ohingaiti Tearooms, where they lived until they sold again on Queens Birthday weekend in 1974. After they sold the tearooms they returned to the cottage, and leased it for six years or so.

As they were 5 miles from the nearest school bus, they were able to get a driving allowance for their car.  Also Marianne got her license at 15 and first took, her brothers, Allan and Bruce, along with 2 other children to the High School bus.  When Marianne went to Teachers College in Palmerston North, Allan got his license the drove the car.

There son Allan went off to the Airforce when he was 17, and Rodney started to build the family home in August 1979 on a section where the Presbyterian Church used to be.  There son Bruce also left school in 1979, and did some casual work in the district going on to some shearing right up into the mid 1980s.

The Death of Rodney Cameron

Rodney and Alison were in Palmerston North for a art exhibition for his aunt Corries art work when Rodney fell ill and was taken to Palmerston North Hospital.  He was diagnosed with Leukemia and flown straight to Auckland Hospital for treatment.  This was about October/November of 2013.

Initially, Rodney was not given long to live, however his situation appeared to improve over the christmas period, after which he was released home and was able to administer his own Chemotherapy treatment.

The night before he died he was rushed into Middlemore hospital where it was discovered the cancer had spread to his bones, and again was not given long to live.  Administered with pain killers for the pain, Rodney passed away between 10:00 and 10:30 on the morning of the 4th of February 2014.

His funeral was held at his local church where he spent a lot of time and was buried in the Manukau Memorial Gardens Cemetery.

Sources of information in this page are primary supplied by Rodney himself in documents he created detailing his life.