This years ANZAC day was quite busy, waking at 3am to get ready, out the door at 4am, practice meet by 4:30, then the first performance at the dawn service at 5:15am at the Auckland Museum with City Of Auckland Pipeband. This was broadcast on Maori TV live.  The band played for about half an hour while the people gathered before the dawn service, then we played the servicemen out at the end of the service.  We were also invited into the museum for breakfast before the next service. 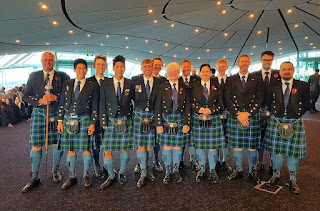 The next performance was the Newmarket Service Parade at 9am.  This started from Teed Street and went up Broadway past the cinema and swimming pool.  The road was only half closed and lead by a police car.
Once that was finished the next parade was for the Henderson Service starting at 11:30.  The service was in front of the RSA, and at the end we were invited in for another performance before lunch.
Lunch finished and we left the RSA about 3pm. I had an hour nap before changing kilts and getting ready for the last performance, for 6pm at the Elizabeth Knox Retirement Home.  This was a small performance playing Amazing Grace and the National Anthem with Jane Murray.  As a bonus we played a few extra marches before marching out ourselves. 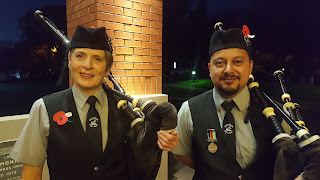 The day was very long and tiring but, all in good spirit.  I was able to wear my Grandfathers compulsory military training medal and got a lot of playing in.